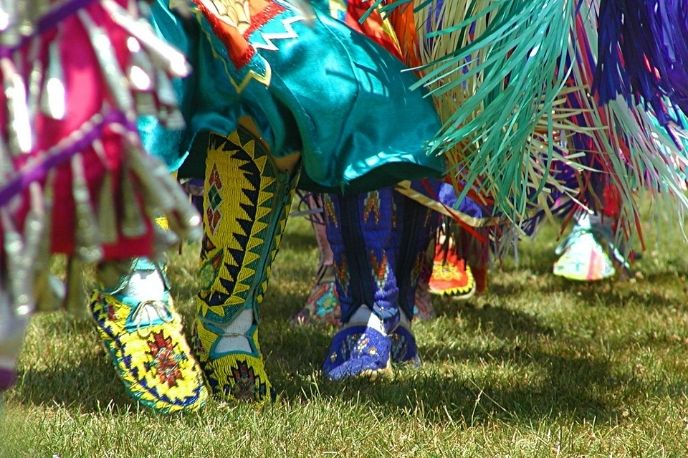 Dancing is more than a series of fluid movements, steps, and jumps. To the Native Americans, it’s an evocative storytelling device, a means of expression, and a language in itself. Dancing is designed to promote camaraderie and a sense of interconnectedness between members of the community. Natives use it as a part of spiritual rituals, ceremonial events, and lighthearted community gatherings.

At ceremonies, dance is often accompanied by spirited tribal music. The players of larger rawhide drums and smaller, handheld instruments provide the community with a beat to step to.

Native dances can be grouped under three primary purposes: social (as seen at powwows), ceremonial, and storytelling. All three of these groupings underline the importance of dance in Native American culture in unique ways.

The powwow is a grand social event, intended for communities to sing, dance, and honor their cultures. The event’s continued existence shows that native youths value the importance of dance in Native American culture just as their ancestors did.

Dances vary from event to event, with some being more prominent, depending on the geographical area and the tribes that thrive there.

The dances performed at powwows are typically split by gender, with some traditionally performed by men and others by women. The chicken, grass, fancy, traditional, and straight dances are regarded as men’s dances, while buckskin, cloth, jingle, and fancy shawl are oriented toward women. Women’s dances tend to be slow, graceful, and elegant, while men’s are active and upbeat.

Several of these dances make heavy use of traditional clothing. As part of the jingle dance, a dancer’s apparel is outfitted with lengthy strings of bells, which chime as the dancers hop and sway. The fancy shawl dance, as its name suggests, puts a strong emphasis on the elaborate designs of the women’s shawls.

Ceremonial and symbolic dances can be either celebrative or somber.

The ghost dance calls for earthy regeneration and the restoration of life to its former bliss. It was widely practiced in the late 19th century, when the population of buffalos diminished because of purposeful, malicious overhunting, and Native land and individuals were under assault by the colonists.

The sun dance, with its more pleasant connotations, celebrates the continuity of life. Traditionally, it’s practiced during the summer solstice. The ceremony lasts up to a week, beginning at dawn and ending at sunset.

Dances that prioritize storytelling are a means of expressing cultural beliefs. They allow Natives to tell the tales of ancestors in a demonstrative way.

The hoop dance utilizes a variety of colorful rings, which are carried by dancers and are used to form different, often animal-related images. The hoops are said to represent the circle of life.

Experts debate the origins of the hoop dance. Some say it stemmed from a story where the creator gifted a set of wooden hoops to a man on his death bed who wanted something to leave behind. A more practical origin story insists it was created by the mountain dwellers as a way to teach their children dexterity.

One thought on “The Importance of Dance in Native American Culture”