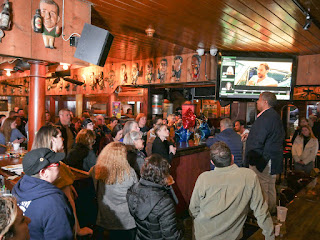 Note: All photos were taken by Declan Ryan with Riain Rising.


The speech closed with the familiar chant, “this is what democracy looks like!”

On Thursday, February 6, 2020, Antoine Pierce announced his bold progressive platform to a packed audience of over 100 attendees of Big Easy Magazine’s “Crawfish, Beer, & Politics” event. Pierce is running against incumbent Senator Bill Cassidy, a republican who has faced criticism for walking out of President Trump’s impeachment hearing and reneging on his promises to make healthcare more affordable and accessible.

“This campaign is for the people,” Pierce said to the crowd. Elected officials in Louisiana have “gone to D.C. and forgotten who they work for.”

Pierce touted his native roots, as a native of Baton Rouge. The Istrouma High School graduate contrasts with Senator Cassidy, who hails from a wealthy suburb of Chicago.

But that distinction was minor in comparison to the policies he endorsed. “I don’t believe anyone in the richest country in the world should die or go bankrupt because they do not have healthcare.” 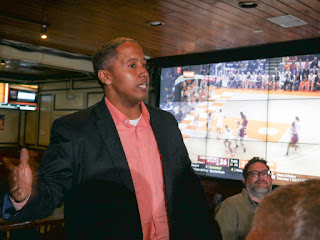 Pierce gave his resounding support for reproductive rights. “Women’s reproductive choices should not be made in the halls of Congress or in the State Capitol.” Senator Cassidy is a staunch anti-choice politician, who drew distinctions from his opponent Mary Landrieu in supporting a federal ban on abortions after 20 weeks.

Senator Cassidy has also supported bills based on unscientific claims of fetal pain and worked to eliminate funding for reproductive health services nationwide.

He also called for the elimination of student debt, the reversal of the Citizens United decision, the decriminalization of cannabis, an increase in the minimum wage, strengthening LGBTQ protections, and fighting climate change.

The elephant in the room was the question of whether a progressive could win a Senate seat in what has become a Republican stronghold over the past few decades.

Scott Ploof, the publisher of this magazine, acknowledged that “being a progressive in Louisiana is a difficult road to walk.” But Pierce was more sanguine.

“I think our politics work for the people. These work for everyone. I don’t care about the labels,” he said.

Pierce isn’t off the mark. A 2019 survey of 800 Americans across party lines indicated majority support for progressive policies such as paid maternity leave, tuition-free college, Medicare for all, increasing the minimum wage, and government funded childcare.

Whether Pierce can transform such sentiments into votes remains to be seen. But he spoke to the crowd with aplomb and fervor, at times with the cadence of a Southern minister.

The sentiment on Thursday was similarly optimistic. “Antoine [Pierce] is used to finding the common ground that brings people together – rather than allowing hyperpartisanship to tear us apart,” Ploof said to the crowd. “That is why I truly believe he will beat Bill Cassidy in November.”

Pierce’s event was also well received by local politicos, drawing sponsorships from Tony Grana, candidate for Orleans Parish Democratic Party (OPDEC) District A, Cooter Brown’s and Tony Licciardi of the “My People Vote” app. Declan Ryan with Riain Rising was responsible for the photography, and Brian Webster boiled the crawfish.

Pierce boasts a lifetime of public service and activism to back up his words. He founded the Better Boys Initiative, a Baton Rouge area nonprofit that uses the arts to “develop character and bolster self-esteem” in underserved young men. Pierce served Mayor Sharon Weston Broome on the transition subcommittee for the Office of Community Development, and he was appointed by Governor Edwards to serve on the advisory board for Juvenile Justice and Delinquency Prevention. 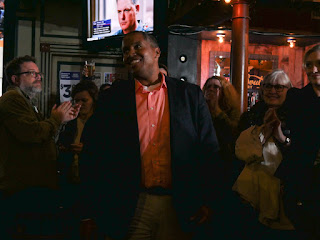 Pierce is making the rounds across the state right now, and Big Easy’s event was the second of his three major events in New Orleans. His next stop is at Blue Flamingo on February 20, at 6 pm. You can find out more about Antoine Pierce at www.antoinepierce.com.

Charlie Schully is a contributing writer for Big Easy Magazine, a lawyer and founder of Bike Uneasy.