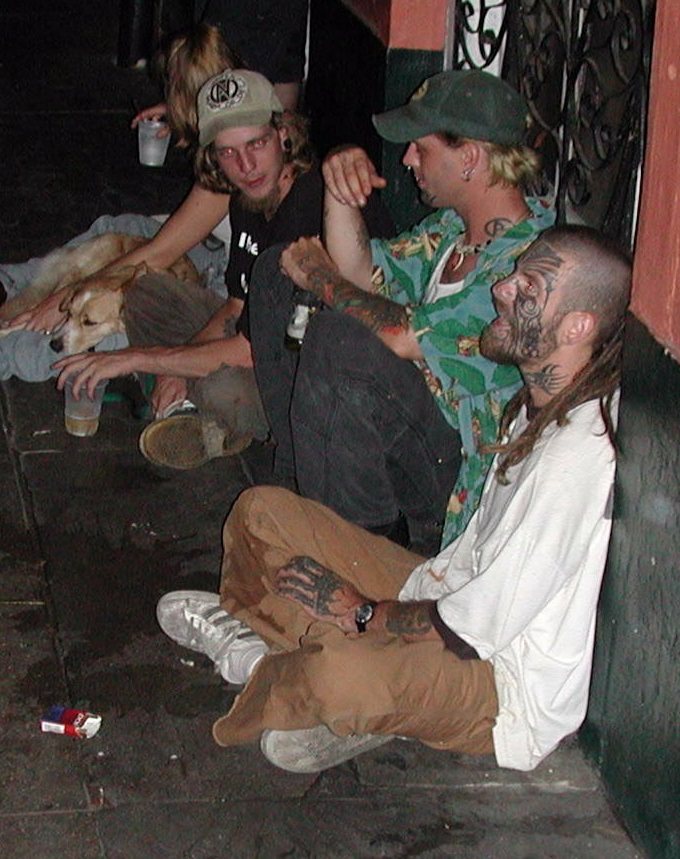 Admittedly, I’ve always had misconceptions about the punk community. The piercings, the music, the volume, etc. I always leaned towards Ska or Pop-Punk, the safer if less exotic choices (among being a short-lived Limp Bizkit fan in my impressionable years). Somewhere in my mind, I conflated punk with anarchy or, at the very least, rowdiness. This was only confirmed for me in mass media presentations like Xavier: Renegade Angel or The Decline of Western Civilization. In Xavier, a whole episode was dedicated to a Utopia for squatters, where everyone living within the lines exists for no rules to the point of extreme parody. In Decline, bands like The Germs would feature self-abuse on-stage and aggressively loud/incoherent lyrics. As someone with OCD and a mind towards order, I just didn’t understand the lifestyle.

There’s a sub-community/culture of young homeless kids and young adults in New Orleans that is often referred to as “Gutterpunks”, which is clearly not meant to be affectionate. They wander the streets and alleys, stooping on curbs and sidewalks, and occupy areas known for panhandling, wielding a look that suggests they “don’t give a fuck” and a go-cup that begs for change. I’m no conservative and I do believe in charity, but from the outside looking in, this group doesn’t lend itself much to sympathy or empathy.

Of course, this goes along with the whole “respect is earned” and “boot-straps” mantras, which honestly speaking are both full of crap when applied universally. Don’t judge a book on its cover, basically, and try to treat everyone with the equal opportunity of being heard. From the late ’90s, that’s twenty+ years ago, comes a documentary that you’d only know through google searches on the subject and visiting old and obscurely designed webpages, a ninety-minute dive into dive living in our city called Gutterpunks by Brent Sims & Ted Baldwin. I was most fortunate in being sent a copy of this artifact from Mr. Baldwin a few years ago, and I’m even more fortunate to be going over my experience and feelings in watching. Hopefully, this film that once graced the old Movie Pitchers cinema will be shown to the light of day once again.

Shot on analog grade video, we begin with a statue – possibly in a cemetery – of a child angel, while a voice-over reads a quote from The Bible. It goes for a good minute, before jumping right into punk sounding rock and scattered clips of kids walking the streets of the French Quarter and beyond. Throughout Gutterpunks, in small bursts, we follow an unnamed young male, wearing a torn and loosely fitting shirt (probably slept in for days), as he seeks a light for his cigarette. Stylistically speaking, these bits represented great breaks from the interviews and action but were ultimately cut short when at around the half-hour mark, someone indeed lights his smoke, for which he’s mildly thankful.

That kid may not have been the squirrel from those Ice Age movies, but his little quest was semi-captivating and even evocative of what the film overall is suggesting and stating: Streetlife, whether by “choice” or happenstance, is rough, tough, and not fair for anyone – especially young adults. I have quotations over choice, as during many of these conversations the filmmakers have with these individuals, it comes up that they are living like this, meal to meal, place to place, street after street, society be damned, of their own decision making. However, it’s not really much of a choice when your parents kick you out or the system dumps you because there aren’t enough beds. Gutterpunks does not explore this idea, choosing instead to let the group tell their stories their own way and in their own words. And, in these moments, Gutterpunks is great.

Allow me to highlight two such interviewees. Eyor and Scoobie. They each represent opposite ends of their community personality spectrum, one being more aggressive than the other, one being more introverted, shy, and thoughtful than the other. There’s a mix for sure of youngsters, mostly white though, but all experiencing some form of “freedom” to be themselves. To get this freedom, they ask for spare money or find “Sugar Daddies & Mommas” to buy them things. This isn’t a scam, mind you, as they’re just looking out for themselves in any way they can hustle. But for Scoobie and Eyor, things cut more deeply.

Scoobie is, I believe, the first shown to be interviewed in Gutterpunks. Right away, he swears and f-bombs big-time, but without raising his voice. His clothes look fairly washed, but his demeanor is what gives him away. He’s angry cause “it’s his right to be”. He’s articulate enough, but really only in the way that someone who has experienced a lot is. Some of his philosophizings on America and society come from a place of disdain for everyone, but he isn’t violent. For Scoobie, being heard for a few minutes time is an outlet that doesn’t come too much, and he’s got plenty to say. He claims to be well-off on the streets, living “like a King”. We almost want to laugh at his brashness and vision for how he’s doing, but to do so would be cruel. His story is one of sadness.

Eyor, named after the famed Winnie the Pooh character known for being depressed, combs with blonde hair to the side in a slick way for the camera. He’s timid, shaking often, but not from drugs. His nervousness on display, his wide-eyes observed, the film focuses on Eyor with both intrigue and a wanting to reach out and hug. There are few smiles, but when they come, it’s all as a result of his anxiety. He speaks kindly of his friends and family – especially his Mother – and would rather everyone just be at peace. Twenty+ years later, I hope he’s ok. Truly, I do.

Gutterpunks completely reversed course for my way of thinking about a whole community. I generally try and treat people the way I wish to be by others, but inner monologue may judge too fast. In the film, almost all those interviewed refuse the term Gutterpunk, and rightfully so. They’d prefer to not be categorized, but if we were to label them, it’d just be as homeless, or kids. Gutterpunk is dehumanizing and doesn’t make light of what’s happening in a good way.

Why do they flock to New Orleans? Well, why does anyone flock here? This is a city for and of outcasts, but even within our limits, there are restrictions to who is tolerated, it would seem. Gutterpunks does well in exposing this truth towards a most specific and most forgotten group. It’s not interested in finding answers or solutions yet, as the city acts as if it’s not worth handling more than half-heartedly. The first step in solving a problem is acknowledging and understand that there is one. And it doesn’t belong to Scoobie. Nor Eyor. Nor any of the others. It’s on the passers-by.